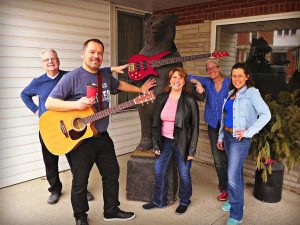 Mighty Harmonics is a small but mighty acoustic band based in Ottawa. We are versatile and fun with a love of performing songs that have pure melodies and sweet harmonies. The group puts their own harmonic spin on tunes from the 1950’s to present day, while staying true to the spirit of the originals. Currently, the group’s repertoire includes well over 100 songs, covering pop, rock, alternative, country, oldies and standards. The band performs throughout Eastern Ontario in a variety of venues.

Our Beginnings
After a decade-long break from the music scene, guitarist Darren Fajcz decided to act upon his longtime desire to form a band. Darren envisioned forming a band with like-minded individuals who shared the same musical sensibilities as he: love for both a good melody and harmonic singing. He sought out other fun-loving artists who were dedicated to their musical craft, and in 2015, as luck would have it, Darren found four talented and harmonious musicians.